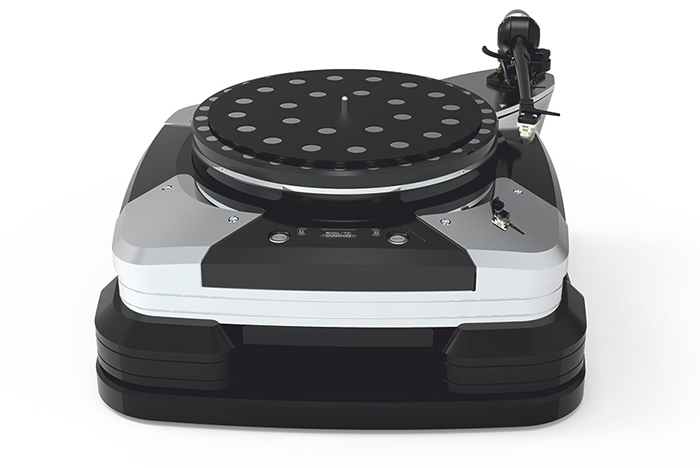 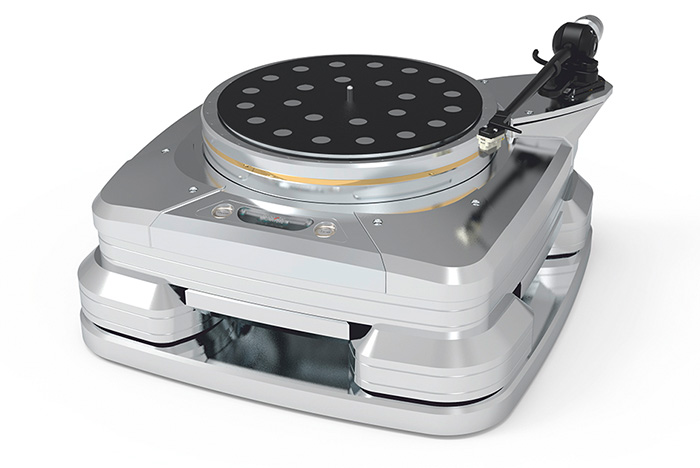 His father the INVICTUS has received cult status direct after it was released. Reviewed as the best turntable in the world he still is an extraordinary experience.

But as the INVICTUS is a real large turntable our aim was to create a turntable with a sonic performance close to the INVICTUS but with a much smaller footprint. By using latest visionary „State of the Art“-engineering technique and most sophisticated computer programs we developed his son INVICTUS jr. Extensive use of CLD-technology and modern CAD-analysis created a fantastic new turntable.

Thanks to its design, which allows adding up to four tone arms the INVICTUS jr. gives you maximum flexibility. The INVICTUS jr. ground base consists of an elaborately milled bottom part, optimized according to the latest scientific on mechanics and using the finite elements method for stiffness and low vibration, covered by a perfectly milled top plate on which the INVICTUS jr. chassis is mounted.

The 3-layer aluminum and brass sandwich platter is entirely new and also uses CLD-technology. A highly damped platter with huge rotational energy. 54 Silencers with their vibration absorption add that last iota of perfection. Another step ahead in sound quality.

By looking at the main platter Tidorfolon-bearing you will recognize immediately how this hand adjusted bearing is virtually perfect for guiding the platter with almost no slackness and, at the same time, no friction and no noise. Enthusiasts and experts around the world appreciate and admire our Tidorfolon-bearing for its precision and legendary reliability. It is always manufactured with the greatest love for detail and precision.

Another very important component for an extraordinary turntable is the motor. To develop it, we put in our 22 years of experience. The result is a 4-motor drive moving a tapered sub platter that bears the Silencer platter. Thanks to the 4 motors, and the digital motor controller the platter gets enormous power for quick run-up and stable speed. The circular arrangement around the bearing completely avoids tension on the bearing, so that it can run perfectly centered.

At the end, the result is a dramatic improvement. Just good enough go into the INVICTUS jr. Each one of my 22 co-workers has given their best for the INVICTUS jr. and we are very proud of that.