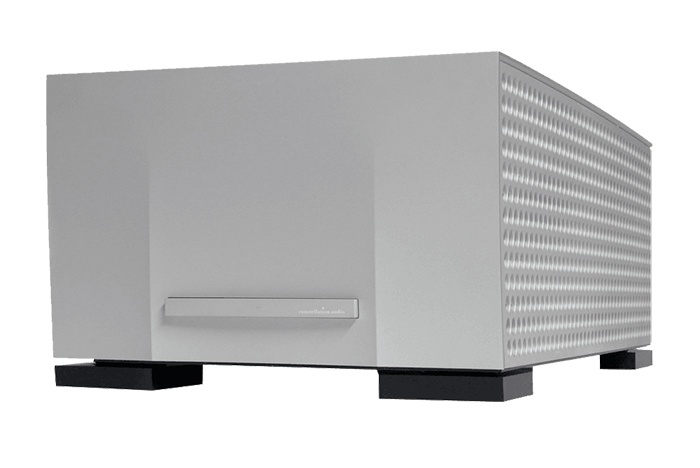 The revolutionary Balanced Bridged circuit topology used in all Constellation Audio amplifiers gives the Hercules II Stereo exceptionally low noise and outstanding common-mode rejection ratio. But those are just technical terms. What’s more important is that with an essentially perfect balance between the positive and negative halves of an audio signal, the Hercules II Stereo achieves a level of musicality previously heard only in our other amplifiers. The key element in our topology is the use of only N-type output transistors, instead of a mix of N- and P-type transistors as found in other fully-complementary solid-state amplifiers. Because every element of the musical signal passes through exactly the same types of circuit components, all the musicality of the original single-ended module is preserved.

Our 500-watt/8-ohm per-channel power rating for the Hercules II Stereo is actually pretty conservative; it’s really more like 550 watts. And 750 watts into 4 ohms, and a full 1 kW into 2 ohms. Thanks to its increased power supply capacitance and ample cooling capacity, the Hercules II Stereo drives low-impedance speakers with ease.

Instead of achieving the Hercules II Stereo’s in the traditional way just bulking it up with more output devices we build it from numerous 125-watt single-ended modules. It thus has the musicality of smaller amplifier, and the power and control of a large amplifier.

In the Hercules II Stereo, as in all Constellation Audio amplifiers, both the positive and negative halves of the audio signal see exactly the same type of output devices: N-type transistors. In other amps, the transistors are half N-type and half P-type, resulting in an inherent signal imbalance.

Our circuit design combines high bandwidth with inherent high stability. Unlike many high-powered amplifiers, the Hercules II Stereo does not need a Zobel network at the output terminals to ensure stability at high frequencies.

Dual-mono design with one 3,000-watt transformer per channel

Each of the Hercules II Stereo’s channels has its own custom-wound, 3,000-watt toroidal transformer. Both transformers contain multiple isolated sets of windings to supply independent power feeds to various circuits within the amplifier. The isolation of the windings assures consistent voltage and current supply to all of the amplifier’s circuits, regardless of the demand placed on those circuits. Because each channel has its own transformer and supply capacitors, it is unaffected by the operation of the other channel.

With more than 1,000 watts total power into 8 ohms, the Hercules II Stereo demands a constant, free-flowing supply of cool air. To achieve this without the use of fans, we incorporate two huge heat sinks and hundreds of large ventilation ports to minimize airflow impedance and maximum cooling.

The Hercules II Stereo incorporates two Line Stage Gain Modules, one for each channel. This module uses servo circuits and hand-selected FETs to assure that all incoming signals are perfectly balanced by the time they reach the amplifier stages. This is the same exact circuit found in our Altair II and Virgo line stages, and in all of our source components.

If you are using a Constellation Audio preamplifiers, you can use the Hercules II Stereo’s Constellation Direct input. This input bypasses the amplifier’s Line Gain Stage Module, which simplifies the audio chain for the best possible detail and musicality.