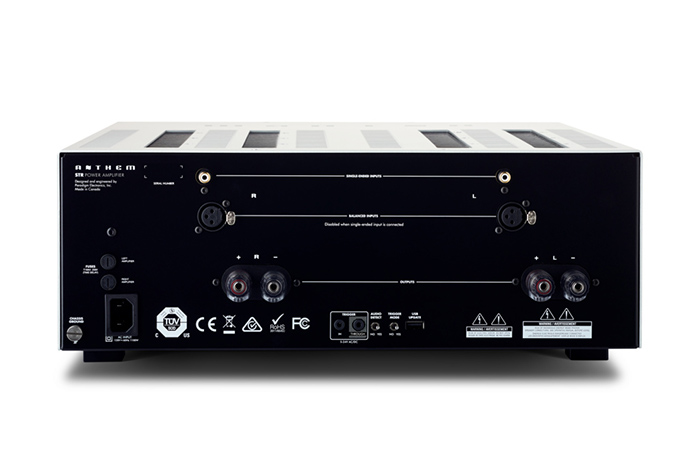 The STR Power Amplifier is the beating heart of a world-class 2-channel sound system. It delivers massive power generation, with audiophile-quality output in a smartly designed component.

Inside, the STR Power Amplifier uses two colossal transformers and multiple high-current output devices so the most subtle details and dynamic peaks are handled equally well. Outside, its beautifully designed cosmetics, including a 7-inch graphic control display and secure, highly conductive audiophile connectors provide a perfect match to the STR Preamplifier.

Experience the immense dynamics of up to 800 clean watts delivered into demanding 2-ohm loads, or 400W into 8 ohms/600W into 4 ohms continuously and with both channels driven.

Conservatively rated, in a low-profile design shaped to minimize hum, the low-impedance toroidal power transformers — one for each channel — make no sacrifices when it comes to delivering a continuous supply of pure, clean, low noise power. As well, both the power supply impedance and internal cabling inductance are minimized to deliver a clear path for maximum power.

The amplifier channels are thus able to deliver stable, continuous power at maximum output without affecting one another, even when driving the lowest impedances. While some amplifiers oscillate or run out of power when driving lower impedance loads, the STR Power Amplifier remains perfectly stable under all conditions.

The amplifier sections are Direct Connected to the power supply capacitor bank. This keeps output impedance remarkably low while making more power available to the amplifier. Even when driving lower or complex impedance loads, the result is audibly superior performance.

In addition to the traditional options for power-on, the STR Power Amplifier allows trigger mode and audio signal sensing to be combined so you would never need to think about turning the amplifier on or off manually. This can be useful when using a preamp with Home Theater Bypass mode together with a surround sound processor in the same system.

Exclusive ALM™ technology monitors internal temperature, current and voltage to ensure safe and uninterrupted long-term operation. ALM is not in the signal path, so it never gets in the way. Instead, ALM engages instantly, but only in the most extreme circumstances, to protect your amplifier and speakers from damage, while lowering the chance of a line fuse blowing during an over-current condition. The front panel display confirms status at all times.