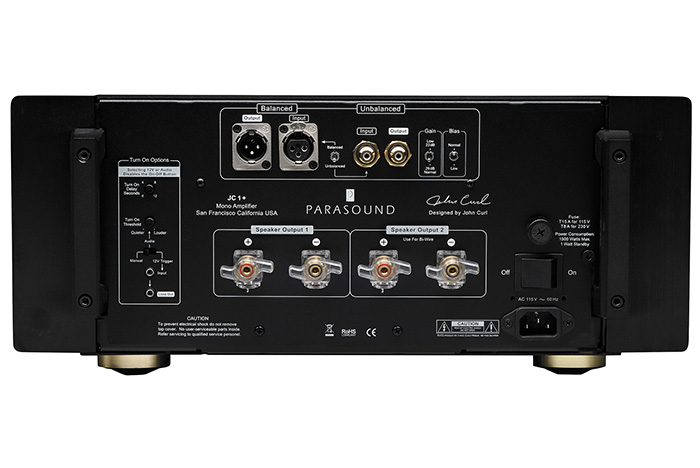 The origin of the JC 1+ An audio historian could make a persuasive case that our new Parasound Halo JC 1+ is the most ambitious and extraordinary achievement since I established the Parasound brand in September 1981. For almost 40 years our mission has remained the same: build audio components that sound better, measure better and last longer than our competition, at prices that are sensible. We call this “value engineering.” It challenges us and guides every decision we make for every product we build. The origins of the JC 1+ go back to 1989 when we engaged the legendary John Curl to design our power amplifiers. These were very successful, so in 2000 we commissioned Curl to develop the JC 1. Released in early 2003, the JC 1 immediately earned the respect and admiration of reviewers and audiophiles alike. It set new standards of performance and value that were unrivaled during its 16 years in production. In fact, the last JC 1 to come off the production line sounded just like the first JC 1. There were no “improved” versions during its entire product life — simply because the JC 1 design, development, and manufacture made it so far ahead of its time. A few years after the JC 1’s introduction, consumers and dealers began asking when we planned to build an improved JC 1. After all, this is a common practice in the audio industry (which makes me wonder, why couldn’t they get it right in the first place?). My reply was always the same: “We could make changes to increase its price, but none that would materially improve performance. Yes, we could make a more expensive JC 1 and, if we were lucky, it might sound as good as the existing JC 1”. In early 2014, John Curl announced that he was investigating ideas that could substantially improve the JC 1 performance. As all Curl’s theories are based on objective science, not wishful thinking or self-suggestion, I was all ears. It’s prudent to be skeptical of new ideas, and we were. So Parasound hand-built six experimental prototypes to test Curl’s theories. What we measured and heard were nothing short of astonishing. The JC 1+ decisively outperformed the JC 1 in every respect.

Curl is a master at eliminating undesirable electronic noise. For the JC 1+ he specified a pair of Bybee Music RailsTM, which are active high frequency noise filters that “scrub away” every vestige of noise on the input and driver stage B+ and B- rails. These ingenious and patented devices were conceived by Jack Bybee and invented by an eminent microwave engineer and audiophile in collaboration with Curl and noted circuit board designer Carl Thompson. Carl is known for designing the circuit boards for Curl’s Vendetta Research phono stage, and the Parasound JC 1, JC 2 BP, JC 3+ and JC 3 Jr. To optimize their effect, Carl designed Music Rail circuit boards exclusively for the JC 1+. The JC 1+ is the first commercial product to employ these remarkable devices. As in the JC 1, the JC 1+ input stage uses hand-matched pairs of Toshiba 2SJ74 P-channel and 2SK170 N-channel J-FETs. These coveted devices remain unmatched for their low noise. Parasound is one of the few companies that has invested heavily to secure an ample stock of these rarest of all J-FETs. The JC 1+ employs FR408 circuit board substrate for the critical input and driver stages. FR408 was invented for ultra high-speed applications in super computers and aerospace. Carl recommended FR408 for its superior propagation of high frequencies that outperforms Delrin. Our obsession with eliminating noise that pollutes sound quality led us to add shielding to this board to isolate it from internal stray currents that might diminish its perfection. The JC 1 driver stage was an excellent single-stage circuit. Curl predicted that a two-stage cascode driver would make a substantial performance improvement because a driver circuit with cascode topology has some of the favorable attributes of vacuum tubes, namely higher input-output isolation, higher input impedance and higher output impedance. Its greater bandwidth and open loop gain were expected to improve linearity and a noticeable improvement in sound quality. This proved to be true.

Curl affectionately referred to the JC 1 as a “stump puller” because its 135 amp peak current enabled it to drive any commercially manufactured speaker with ease. Over the years, he has observed an increasing number of highperformance speaker manufacturers employ lower impedance to achieve their sonic objectives. Impedance dips below 2 ohms are not uncommon. Such punishingly low impedances increase an amplifier’s odd higher-order harmonic distortion, a primary cause of listening fatigue. Driving low impedance speakers doesn’t necessarily require more watts, but higher current is imperative. We raised the JC 1+ peak current 33% to 180 amps with the addition of six Sanken 15A/230V/60Mz bipolar output transistors, for a total of 24. Accommodating six more output devices necessitated changing the output stage circuit board’s orientation from horizontal to vertical. This added welcome benefits of more effective heat dissipation and easier serviceability. To conduct higher current flow in the JC 1+ we made the copper traces on its main circuit board and N and P channel output stage circuit boards twice as thick as on the JC 1. Supporting this substantial current required an even more potent power transformer. The massive 2.1 kVA transformer weighs 30 lb. (13.6 kg) – 30% more than its predecessor. Developing this power transformer was challenging and required 11 hand-made samples before we achieved the necessary power and total absence of mechanical vibration. The JC 1+ power transformer accomplished this with an especially potent and expensive steel core. To unleash greater dynamics, the JC 1+ uses six 33,000uF Nichicon Gold Tune capacitors, a prodigious total 198,000uF, compared with four capacitors and 132,000uF in the JC 1. Gold Tune capacitors are among the finest capacitors ever designed specifically for high-end audio applications. Although these Gold Tune capacitors were discontinued years ago, Nichicon continues to manufacture them exclusively for Parasound.

Audio signals inside the JC 1+ travel from the input/driver board to the main board via shielded oxygen-free copper interconnects with 24k gold-plated connectors for optimum signal integrity and long-term resistance to corrosion. Strategically routing each internal wire further contributes to its exceptionally high signal-to-noise ratio.

This rear panel is all business

As in the JC 1, there is a two-position toggle switch to select normal bias and 25 watts in pure Class A or lower bias and 10 watts in pure Class A. The purpose of this switch is to reduce the temperature of the JC 1+ with a barely perceptible effect on sound quality. New to the JC 1+ is a two-position toggle switch to select gain of 29dB or 23dB. This can minimize residual noise if you have a high-gain line stage preamp with a “hair trigger” volume control and / or high sensitivity loudspeakers. The JC 1+ auto turn-on circuit is designed with greater audio sensitivity so the JC 1+ won’t turn off during extended quiet musical passages. Also new is a heavy-duty AC master power switch for when you’re away for business or pleasure. Our proprietary 24k gold-plated spinner style speaker terminals accept banana plugs, up to 16 mm wide spade lugs, and up to 5-AWG bare speaker wire. We provide two pairs of speaker terminals as a convenience if you’re already bi-wiring your speakers or might try this in the future. The JC 1+ employs balanced Neutrik locking-type XLR Input and Loop output connectors, and unbalanced Vampire RCA Input and Loop output connectors to facilitate connecting multiple JC 1+’s for bi-amping or looping the audio signal to a subwoofer equipped with an XLR input. JC 1+ turn-on options include a variable control to select how much time elapses between the turn-on of multiple amplifiers. Staggering amplifier turn-on prevents AC line voltage sag and “brownouts” that might occur when turning on multiple JC 1+’s simultaneously. We added an LED which makes it easy to determine if the JC 1+ is turned on and ready to play.

Some of you reading this have heard me compare our product development process to the carpenter’s adage “Measure twice, cut once.” We’ve taken that to an extreme. Because the JC 1+ is Parasound’s flagship, we delayed bringing it to market a full year after its development was signed off by Curl and our engineers. We used this time to test JC 1+ production runs with a rigor that, while unheard of in the audio community, was appropriate for this exquisite and significant amplifier.

Parasound was founded with a guiding principle that we would find a way to build products that were consistently a superb value without compromising quality and longevity. Our success is evident each time you lose yourself in your favorite music. For our 35th anniversary in 2016, we honored that resolve with the motto “Integrity Endures”. When you visit your Parasound dealer to audition the JC 1+, you’ll immediately appreciate how much it will enhance your musical enjoyment. I have no doubt you will agree with me that the JC 1+ is the boldest realization of Parasound’s values and rigorous commitment to quality – our testament to Integrity Endures.